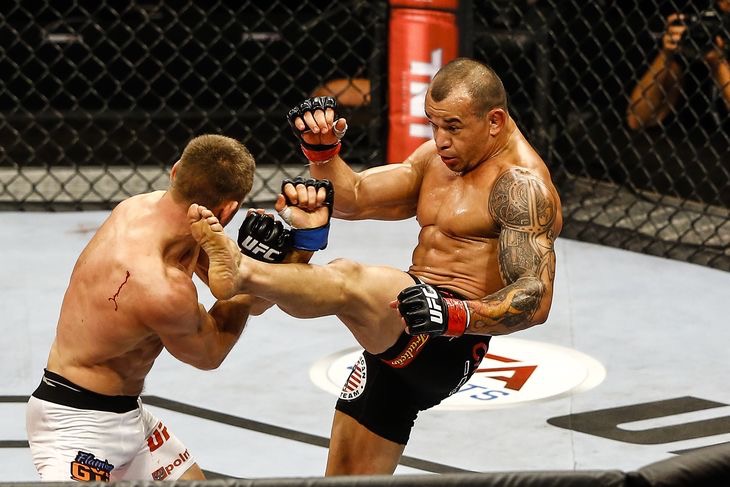 USADA strikes again. Nine year UFC veteran, Gleison Tibau, has been “provisionally suspended” by USADA, failing an out of competition drug test for EPO (recombinant human erythropoietin). Tibau offered a statement regarding the test below (reported by mmafighting.com):

I’m not used to an easy life. Since I was a kid, I have fought for everything I’ve conquered, I have overcome adversities, and I’m really proud of who I am. I face this doping news as another stone that I have to take out of my way as a professional fighter and a correct citizen. As a responsible man that I am, I never believed I ingested something that could fantasize my performances. I make sure I have a healthy life outside the sport, and honest and clean inside the sport. I train hard, I do my best.

However, I can’t turn my back to a notification from USADA, an institution with credibility and a mission of stopping dirty game, doping. I will talk to my medical staff in the next days to find out where we made a mistake, and will do what we can in my trial. I fight professionally for 16 years, nine being inside the UFC, and was never in this situation. It tastes bad, like a loss inside the cage, but will be a big lesson, as experience to become more alert as an athlete of what can or can’t be done in the sport’s anti-doping policy.

I’m deeply sorry for what happened. I want to apologize to everyone involved, the UFC, American Top Team, my teammates and, of course, Abel Trujillo, who I fought on Nov. 7. I’m willing to give him a rematch, if he agrees. I’ve fought and defeated athletes that failed drug tests, like Polish athlete Piotr Hallman last September, and I know how bad it feels for the opponent.

I can’t forget to apologize to the fans, everyone that always supported me. I’m sure this time won’t be different, as I’m already getting messages and support through social media.

Fighting MMA is what I know to do, what I’ve chosen as a professional, my income. I take full responsibility for my actions, and I believe the justice will punish if needed, but also clear me if proven.

To the media, I thank the opportunity for giving me a voice in this complex moment that I’m living now, the toughest in my career. I trust in God so I can go back in action in my career in an honored way, like I always did.

The partnership between the UFC and USADA seems to have been just what the sport needed. USADA’s efforts in keeping the sport PED free looks to be on the right track. Although, I must say it is hard to see veteran fighters, who we have seen time and time again in the octogon, losing some of their credibility since the UFC invested in stricter testing. Still, nostalgia aside, they made the conscious decision to cheat. Enhancing your performance in a beautiful, but violent sport puts other competitors in more danger than they are already in. In all honesty, I don’t see doping or PEDs as a significant edge in the cage. While these ways of enhancing your performance allow the user to get stronger, faster, and probably obtain a better gas tank, they are mostly physical. That is only half the battle in that cage and if they face someone mentally tougher or more intelligent, more often than not they will be beaten strategically. The mental aspect of the sport is vital and fighters that cheat, in some way, are mentally weak. Now we are seeing veterans getting popped, possibly because they are aging and the game is becoming increasingly more advanced than the rudimentary styles of the early years. Respect the sport and respect your competitors.

I wish Gleison Tibau nothing but the best moving forward and hope to see him fight again.