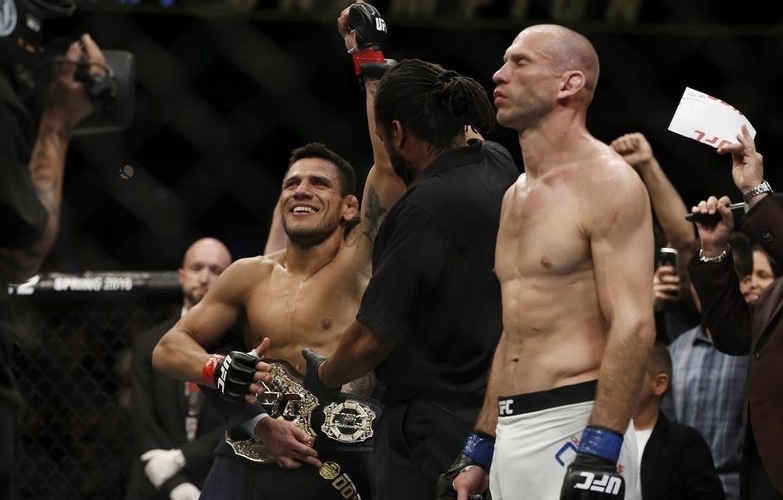 The Lightweight Championship went down this past Saturday night. Rafael Dos Anjos looked better than ever after a long layoff, proving ring rust was not a factor.

Cerrone has been a notoriously slow starter and this time it caught up to him. During the broadcast, someone noted that Cerrone seemed to be carrying a lot of weight going into the fight. We saw, in Road to the Octagon, that Cerrone’s grandmother is nearing her final days. We saw an emotional side of Donald Cerrone that we have never seen before. Perhaps it was too much, for the fan favorite and former owner of an 8-fight win streak, paired with the pressure of his first title shot. RDA was on a mission from the moment this fight was announced. He seemed emotional when it came to Cerrone, possibly detrimental had it been that type of emotion. However, it was his doubters and naysayers that motivated this fighter, itching to show the world every time he got close to his challenger. A man on a mission to prove to the world he is the best lightweight fighter on the planet. Everything RDA threw had bad intentions and with brutal combinations, capitalized on the slow starting Cerrone a minute into the fight. A knee to Cerrone’s liver was the beginning of the end. While Cerrone’s body started shutting down, RDA blitzed him against cage with a beautiful display and accurate flurry of punches. Though some may say that the stoppage was early, and as a Cerrone fan I would have liked to see it go longer, it didn’t look good for “Cowboy”.  The fight was stopped after RDA had Cerrone turtled up landing shot after shot to his ear from behind with no answer from Cerrone.

Nate Diaz looked like he was in his finest form as well, outboxing Michael Johnson in Diaz fashion. He peppered him with a beautiful jab, following with a right straight that landed all night. It was vintage Diaz boxing, with accuracy and volume as well as their notorious mind games. Diaz pulled out a 3 round Unanimous Decision (29×28, 29×28, 30-27) win.

However, Nate Diaz and Rafael Dos Anjos have more than winning in common. Enter Conor McGregor. Both Diaz and Dos Anjos’ post fight interview were focused on the newly crowned Featherweight Champion, Conor McGregor. Dos Anjos took the more humble approach, telling McGregor that if he comes up to take his his title he will show him that it was a bad idea to come up and that he is not going anywhere. Diaz, on the other hand, called the Irishman out in pure Diaz fashion. Completely censored on Fox, majority of fight fans knew what Diaz was saying. Long story short, Diaz laid it out for McGregor saying that he is taking everything he has worked for and if he wants a real fight, he is the guy to give it him. Going further, he says that this is a big money fight and that Conor knows none of those guys has what it takes to bring in a draw. Moreover, he tells Conor that a fight between the two is what every fan wants and they will get paid so let’s do it.

It’s McGregor’s world, and we’re all just living in it.  Fighters are getting smarter and it’s hard not to say that it is everything to do with Conor McGregor. They see the Irishman flaunting his winnings all over the media and his record-breaking numbers. Now they all want a ticket on the McGregor Money Train. For all intents and purposes, MMA has found the polarizing star the sport needed beyond the first ground-breaking star, Ronda Rousey. Conor McGregor is Floyd “Money May” Mayweather, Jr. & Muhammad Ali rolled into one. Now, before you crucify me for making that bold of a comparison, I do not in any way mean that according to skills as a fighter nor accomplishments as a fighter and icon. “Money May” might just be the best (defensive) boxer of my generation. However, my comparison to Conor is in the aspect of business focused on promoting themselves and creating their own desirable image that resulted in lucrative pay days. When I speak about Conor’s comparison to “The Greatest”, in no way am I regarding in the same light as arguably the greatest boxer of all time. When I say that Conor is the polarizing star MMA needed, in no way do I mean polarizing in the way that Ali invented the word polarizing with his actions in the ring and inspirational actions outside the ring. Ali was a cultural icon who fought issues of racial injustice, religious freedom, and against the establishment robbing some of the best years of his career. The only part of Ali I see in Conor is the way he speaks. Ali is considered the best trash talker in sports and I believe Conor is the best in MMA. Though they are not just normal trash talkers. They are intricate and calculated in the way they speak. They have different sort of “mind games” that other people just don’t have. This is how McGregor has stolen the show. Now everyone is asking to fight him. They know that no one else can bring them the same amount of attention and money the way Conor can. Lightweights and Featherweights are all thinking McGregor, and he is sitting back watching it unfold. McGregor responded on social media to the call outs in Conor fashion saying,

“Line them up on their knees with their hands out. I want them to beg me.”

RDA has his hand full without McGregor. I want to see Nate vs Conor because he is right, who doesn’t want see it. Barn burner. However, Frankie Edgar is deserving of a shot without a doubt.